How long would training systems take to make in comparison to individual teaching? And is it faster in the long run?

Did someone inspire you to become an engineer or did you just want to do it?

what else have you made as well as robotic hands?

what is the biggest thing you have made?

is being an engineer really boring? I think it is I don’t like it

have you ever had a bad day on your job?

why should I decide to be an engineer?

What do you make the artificial hands out of ?

What was your first engineering design

are you busy at work all of the time ?

Is it possible to make a robot spine

ASK the engineers any questions you have about engineering.

CHAT with the engineers in a 30 minute long text chat booked by your teacher.

VOTE for your favourite engineers to win a £500 prize to spend on communicating more engineering. 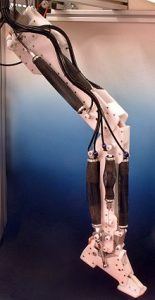 A robotic leg [Image by Dr. Gopal U. Shinde].

When a body part is damaged it can be possible to repair or replace it. Inventive humans have been crafting artificial body parts since at least the days of Ancient Egypt! For most of our history the design and materials used to make body parts stayed much the same. Since the 20th century, however, engineers have greatly increased the variety and effectiveness of artificial body parts, using new materials and smarter design.

The Artificial Body Zone includes an engineer using 3D printing to make new metal ‘bones’, an engineer who makes robot hands for humans and one who tries to grow new tissues that could be used to cure people with serious illnesses. There’s also an engineer who makes metal surfaces more slippery, another who builds new medical devices for the NHS and one trying to make a robot boy learn how to sit.